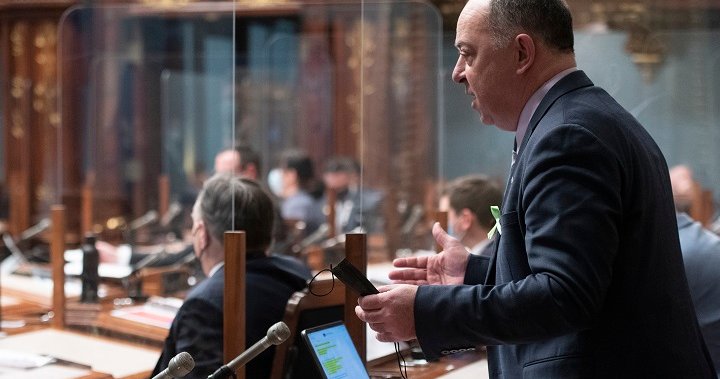 The Barreau du Québec is asking the provincial government to explain why it still needs extraordinary powers to deal with the COVID-19 pandemic.

The Government of Quebec first declared a state of emergency in March 2020. Since then, the declaration has been renewed every 10 days.

Quebec has unveiled a plan to lift almost all COVID-19 restrictions by mid-March, except for the state of emergency. Health Minister Christian Dubé said the order would remain until new legislation is passed allowing certain emergency measures to remain in effect, such as indoor mask mandates and financial bonuses for healthcare workers.

The Barreau du Québec said Monday it was time for the government to explain why it still needs emergency powers.

The story continues under the ad

“Does the current situation require the maintenance of the state of emergency? Catherine Claveau, head of the bar association, wrote in a statement. “Are the measures that will be maintained during the deconfinement plan justified? To answer these questions, the government must provide clear justifications for maintaining certain “exceptional rules”.

Over the past two years, the Quebec government has used emergency powers to impose curfews, ban private gatherings and close businesses such as restaurants, bars and gyms. Emergency orders have also been used to impose compulsory overtime on nurses and to cancel vacations for health workers.

COVID-19: “Quebec will not abandon its efforts” in the context of lagging vaccination rates in young children

Claveau said the bar association is concerned the state of emergency was renewed by the health minister, rather than the province’s legislature. Under Quebec’s Public Health Act, the legislator can renew the state of emergency for 30 days, or the Minister of Health can do so himself for 10 days without the support of other parties.

“The Barreau du Québec questions this power, which is not subject to any time limit or a mechanism requiring the (legislature) to be consulted after a certain period. The Barreau believes that a debate must take place on this subject. After two years, are we still in a hurry?

The four opposition parties in Quebec’s Legislative Assembly have also criticized the continuation of the state of emergency and called for more debate on pandemic measures.

The story continues under the ad

Meanwhile, Quebec health officials on Monday reported three more deaths attributed to the novel coronavirus and an increase of 18 COVID-19 patients. The Health Ministry said 1,776 people were hospitalized with the disease, after 101 people were admitted in the previous 24 hours and 83 were discharged. He said 119 people were in intensive care, an increase of five.

The slight increase in the number of COVID-19 patients came as some restrictions in the province were lifted, including the requirement to show proof of vaccinations at places of worship. Conferences and other public events were allowed to resume on Monday, while arcades, bowling alleys and other recreation centers were allowed to reopen.