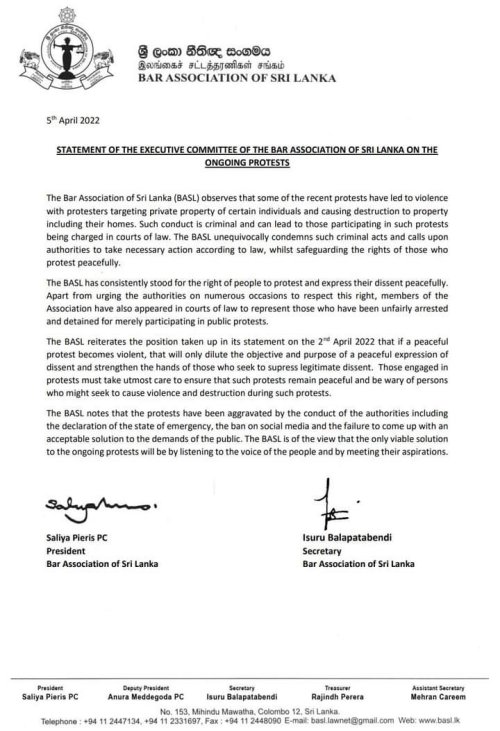 In a statement, the BASL said some recent protests had led to violence, with protesters targeting private property and causing destruction.

The BASL said such conduct is criminal and can lead to participants in such protests being charged in the courts of taw.

The BASL unequivocally condemned such criminal acts and called on the authorities to take the necessary measures in accordance with the law, while protecting the rights of those who protest peacefully.

The BASL stressed that if peaceful protest turns violent, it will only dilute the purpose and purpose of peaceful expression of dissent and strengthen the hands of those who seek to suppress legitimate dissent.

“Those engaged in protests should ensure that such protests remain peaceful and beware of those who may seek to provoke violence and destruction during such protests,” the lawyers’ association warned.

The BASL noted that the protests have been aggravated by the conduct of authorities, including the declaration of a state of emergency, the banning of social media and the failure to find an acceptable solution to public demands.

BASL believes that the only viable solution to the ongoing protests will be to listen to the voice of the people and respond to their aspirations.