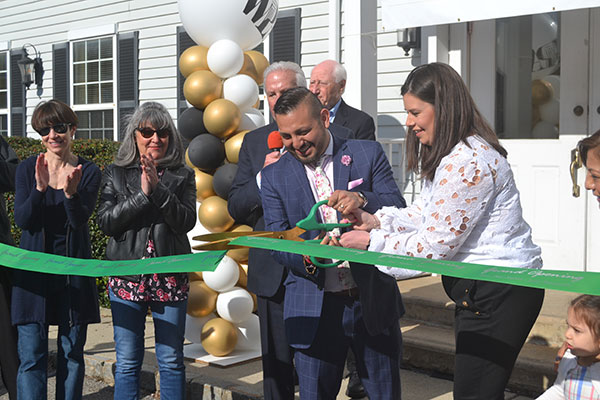 The sun rose to the relief of around 60 people who attended the chilling groundbreaking ceremony and to honor Alvarez and his family who stood outside his new office on Manville Road.

“It’s a blessing to be here,” Alvarez said after cutting the big green ribbon. “So many people have contributed to help me.”

Alvarez, a member of the Pleasantville Village Board, recounted his long journey from Ecuador, how his family began the long process of immigrating to the United States, and how he arrived here at the age of eight in 1989.

“I dedicate this event to my parents and to all parents who sacrifice everything to give their children the best possible chance of success,” he said.

By his side were his parents, Maritza and Guillermo Alvarez, his sister, Michelle, his wife Katie and his two children, Brendan, 5, and Madison, 3. Alvarez’s parents arrived in Pleasantville and started a successful cleaning service, which continues to operate.

“My parents pushed me,” Alvarez told the group. “I agreed to take over my father’s business, but my father did not. I guess he won.

“It’s a big day for us,” said Katie Alvarez, who grew up in White Plains and met Paul in college. “He helped so many families get asylum and green cards. I couldn’t be more proud of him.

Out of respect for the many Latinos present at the ceremony, Alvarez made his remarks in both English and Spanish. Among the dignitaries in attendance were Pleasantville Mayor Peter Scherer and Westchester County Legislator Margaret Cunzio (C-Mount Pleasant), who presented Alvarez with a Certificate of Appreciation from the Council of Legislators. Also in attendance was Shari Ascher, Westchester County’s Director of Policy and Programs for Small Business and Chambers of Commerce, who presented Alvarez with a proclamation from County Executive George Latimer recognizing him as “a lawyer, a leader and an exceptional citizen worthy of the highest praise”.

Alvarez has a long history of counseling immigrants who have sought asylum and has assisted in obtaining visas and naturalization applications, among other legal procedures, required by immigrants.

“It’s my dream come true,” said Alvarez’s father, Guillermo. “Thank God I can see he has his own business. Paul was illegal when he came to this country and he knows what it is. I pushed him when he was in college and pushed him to finish law school so he wouldn’t have to work with me. And by the way, the “W” in his name stands for Washington. »

Alvarez worked at his parents’ cleaning service as a manager and accountant after graduating from SUNY Oneonta where he majored in political science and Spanish. He worked as a paralegal for local immigration attorney Julie Mullaney and attended Pace Law School where, as a student, he worked for the school’s Criminal Justice Clinic and the Pace Immigration Justice Clinic.

Pace law professor Vanessa Merton praised Alvarez, who said she admires him for his professionalism, compassion and leadership.

“I was an immigrant trying to get citizenship and he helped me, he helped so many people,” Yanez said.

Among the friends and relatives at the grand opening last week were Alvarez’s friend Carlos Vallejo and his cousin Bryan Vallejo.

Scherer added his appreciation for the whole family.

“It was a really lucky day for this community when the Alvarez family found their way to Pleasantville, New York,” Scherer said. “And every year that they’re here, everyone knows if you want something done right and smart, bring in an Alvarez.”