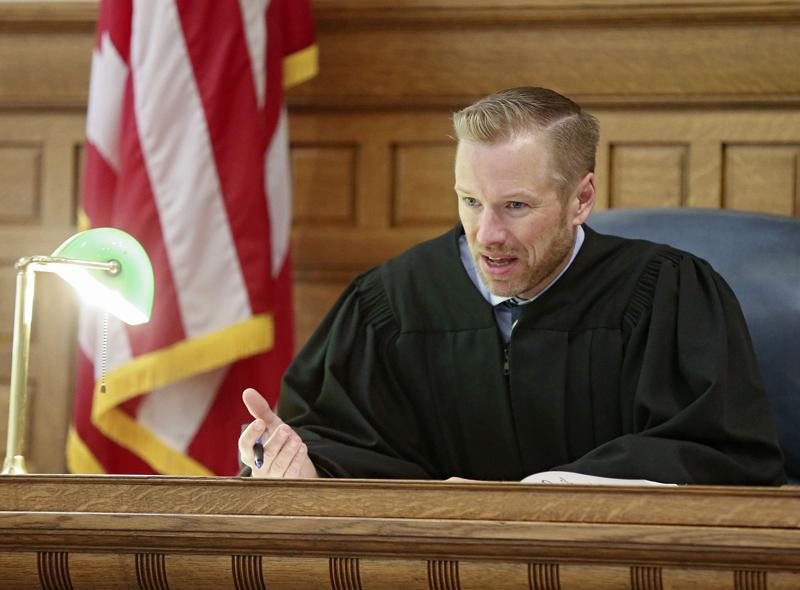 Sixth Judicial District Judge Lars Anderson speaks during a 2017 hearing at the Johnson County Courthouse in Iowa City. Anderson is among the judges to be retained in this year’s general election. (The Gazette)

The Iowa State Bar Association has released the results of a biannual evaluation of state judges, which provides guidance to voters when deciding Nov. 8 whether judges in each district should remain on the bench. bench.

According to the bar’s judicial performance review, members of the bar — lawyers — gave the 11 judges in that district high enough marks to qualify for. Two of the judges – Associate District Judges Valerie Clay and Jason Burns – received retention percentages of 100%.

Clay was appointed to the bench last year and Burns in 2015. Both were former Linn County assistant attorneys before being appointed.

The other judges in this district received marks of 84 to 96 percent.

Historically, judges generally receive high marks, which is to be expected because they are thoroughly vetted by laypersons and lawyers on judicial nominating commissions, said Tim Semelroth, a Cedar Rapids attorney and former member of a nominating commission for district.

Valuation is “a responsibility lawyers take seriously,” Semelroth said. “It’s not a Google review. There’s a lot of work that goes into these. They focus on key traits – the important traits a judge should have. It’s not a popularity contest.

Lawyers evaluate judges on a variety of issues, including knowledge of the law, temperament, communication skills, timeliness of decisions, clarity and quality of written opinions, and impartiality. They are rated on a scale of 1 – very poor – to 5 – excellent.

In this district, Chief Judge Lars Anderson earned the highest mark, 4.6, for knowledge and application of the law. Clay and Burns both scored 4.5 in this category.

Semelroth said judges are also evaluated on their behavior, which is important because a judge must not only treat lawyers fairly and respectfully, but also the citizens who appear before them.

As part of the behavioral part of the assessment, judges are also assessed on whether they decide cases on the basis of law and facts without being affected by outside influence; treat people equally regardless of race, gender, age, national origin, religion, sexual orientation, socio-economic status or disability; and demonstrate an awareness of the influence of implicit biases.

Judge Kevin McKeever received the highest score, 4.65, for his demeanor with attorneys, litigants and court staff.

“A large majority of the population does not know or have any contact with judges, so it is extremely useful for voters to have this assessment,” Semelroth said.

This year, the performance review was sent electronically in September to 5,688 active bar members, and 1,118 completed it, according to the bar association.

In the 6th arrondissement, 117 to 152 lawyers participated in the evaluation of the 11 judges. Each judge had a different number of respondents.

Semelroth said a lower number of respondents doesn’t mean the valuation isn’t a priority, because not all members of the bar are litigants who regularly appear before judges. The only lawyers allowed to participate in the assessment are those who have had sufficient contact and experience with a judge.

According to the evaluation report, lawyers should have direct experience with a judge which provides them with a professional basis for evaluating a judge’s performance; or have practiced before the judge or be reasonably familiar with the work of the judge; or knew the judge’s opinions — as in the courts of appeal.

The Iowa Judicial Branch also provides an Iowa Voter Judicial Directory each election year that contains biographies on each judge for retention. The directory includes information on each judge’s background, education, career and professional activities.

The directory also includes information on the preservation process.

He explains how a 1962 Iowa constitutional amendment replaced a partisan process for electing judges with a nonpartisan, merit-based process.

A nonpartisan commission now vets the nominees, then forwards three nominees to the governor, who appoints one.

Each judge is up for retention at the next general election after serving a full year. After that, they appear on the ballot toward the end of each term. If a judge receives a majority of “yes”, he remains on the seat.