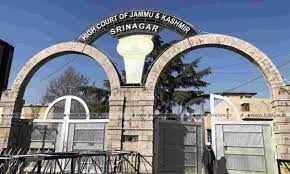 Accused did not receive proper legal assistance due to threat of lawyer no reference to High Court U/S 395 CrPC: Jammu & Kashmir HC

The High Court of Jammu and Kashmir and Ladakh recently observed that the provision of Section 395 CrPC allowing access to the High Court cannot be invoked simply because the accused does not have adequate legal assistance or that his lawyer was threatened.

“Referral to the High Court by the Judge of Session may only be made in the following two cases: (a) Where in a case pending in the Court of Session a question as to the validity of any provision of any statute , order or settlement is at issue or if such provision in the opinion of the court is invalid or of no effect but has not been so declared by the High Court and the Supreme Court; and (b) When a question of law arises for consideration.“

The Court was hearing a criminal complaint relating to the incident of the death dated 31.01.2010 of a certain Wamiq Farooq which was for the first time pending consideration before the judge of the second additional session, Srinagar. Due to the perceived threat, the 2nd Judge of the Additional Sessions, Srinagar, referred the case to the Senior District and Sessions Judge, Srinagar with the request that the case could be transferred to another court.

The Senior Sessions Judge, by order dated 31.12.2015, had referred the case to the High Court as a reference in the exercise of powers under Section 395 CrPC. In the order for reference, it was mentioned that the defendant argued orally that the lawyer he had hired had been threatened and that he did not benefit from any legal assistance.

The Court noted that a reading of subsection (1) of Section 395 Cr. PC would disclose that the court may apply to the High Court if satisfied that the matter pending before it involves a question as to the validity of any law, ordinance or regulation or any provision thereof which may be necessary to dispose of the matter before it or any provision of such law, ordinance or regulation is invalid or of no effect but has not been declared so by the High Court to which such jurisdiction is subject or by the Supreme Court, provided that the reasons be recorded for making such a reference to the High Court.

The Court stated that the order for reference nowhere indicates that the present case involves a question as to the validity of any law, ordinance or regulation or any of its provisions or that , in the opinion of the court, any such law, ordinance, regulation or any provision thereof is invalid or of no effect or that the case pending before it relates to a question of law which calls for a decision of the High Court. In the absence of such a declaration, there can be no referral to the High Court by the Court of Session, the Court said.

Given the above circumstances, the court held that the reference in question clearly falls outside the scope of section 395 Cr. PC (new) or section 432 Cr. PC (old) and is not maintainable. As a result, the plea was dismissed and the case was returned to the Senior Judge of Sessions, Srinagar to pursue the case according to law.